On Tuesday, April 28th I had my final reconstruction surgery. I was scheduled to arrive at 11:30am and go into surgery at 1:00pm. Unfortunately due to the virus, my husband was not allowed to go into the waiting room with me so he had to drop me off. It made me more nervous to not have him with me but there was nothing we could do about it. He ran a few errands, grabbed lunch and then went home to wait for my surgeon to call him with an update on how the surgery went. A little while later the nurse that was caring for me in recovery, called him to let him know that I was awake and that he could come over and sit with me.

Meanwhile I was changing clothes into my gown, putting on compression socks, my surgery cap, and my warm socks to start getting prepped for surgery in the pre-op area. There are 4 bays in pre-op and my surgeon had 3 patients there. Besides me, he had a woman getting a port put in and a woman having a double mastectomy that day. I was 2nd in line after the port surgery and when the lady getting the port surgery left for the OR I knew that my surgery was going to start late which is pretty much the norm.

In pre-op it was obvious that the staff was different due to the virus. I only had one nurse prepping me instead of two nurses, but the nurse I had was very thorough and took her time to make sure all three of her patients were comfortable and well cared for. At one point she even had a little time to sit with me and chat which was much appreciated. I realized while we were talking that she was my pre-op nurse when I had my first reconstruction surgery back in November so it was nice to see a familiar face. 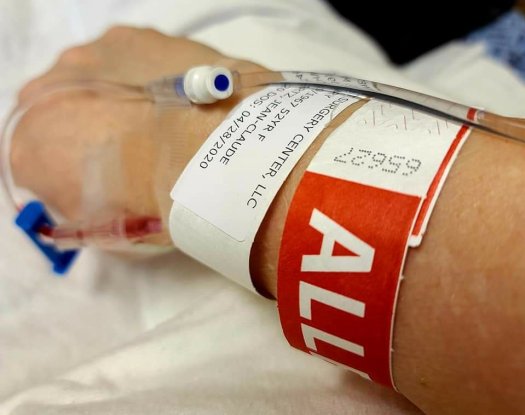 My surgeon eventually came in to see me to take measurements one last time and mark me for surgery. He said that he had thought about my surgery a bit more and thought it would be best to use cadaver tissue instead of having my body create tissue on its own. Because I had gone through 25 radiation treatments I had the risk of my own tissue growing in hard which would deform the look of the implants and cause me pain. So, by using cadaver tissue, my body would be tricked into thinking that there is extra issue in my breast and not an implant that it needs form around. I have to admit that this all sounded fascinating to me and it only confirmed that I am blessed to not only have an excellent surgeon as my doctor but also a breast specialist. I gave him the OK to use the tissue and I signed the consent form. He finished measuring and marking me as we chatted and giggled back and forth and as usual he made me feel completely at ease which was awesome since my husband was not able to be there. I mentioned that it looked like he was pretty busy having three patients in pre-op, to which he replied, “not really, it’s just that we only have one of two OR’s open due to the virus.” Once he was done marking me he said he would see me in a little bit and that my anesthesiologist would be in shortly to talk to me.

My anesthesiologist came in a little bit later talk to me about the surgery and his process for putting me to sleep. We went over my allergies and my past experiences with my other surgeries and he assured me that I would be fine. When we were done talking he said that the nurses would be coming to get me soon and then he went out to the hall and tapped on his neck when he saw my pre-op nurse. As soon as I saw him make that gesture I knew that I was going to get the anti-nausea patch put behind my left ear. I am not convinced that the patch really works well but I wasn’t going to say anything.

What do you think? Cancel reply

Places To Find Me: